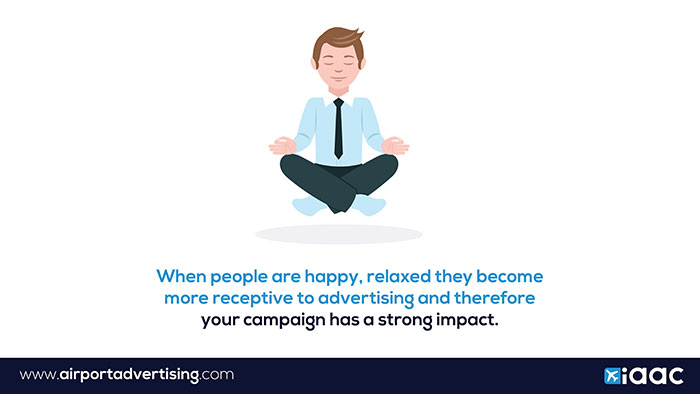 Advertising in closed, controlled environments such as airports and malls, has proven to be highly effective. Recent Nielsen studies confirm that a whopping 80% of frequent flyers take note of Airport advertising, with an even more impressive 42% of said group acting as a direct result of viewing an ad, whether that means walking into a store, or seeking out more information online about the product, brand, or service that they saw advertised. Taken one step further, the Nielsen results also indicate that an additional one-fifth of these frequent flyers made an actual purchase as a result of viewing an ad at the Airport. These results were even more effective as it related to brands and products that were accessible immediately within the Airport grounds – 84% of those asked stated that they were more likely to visit a restaurant at the Airport for which they saw an ad.

With such an impressive response rate, significantly higher when measured against other types of advertising mediums, the question that begs itself is: why is advertising more impactful and effective when viewed within a closed controlled environment?

The answer lies resolutely in the particular mind-set of a consumer who finds himself in such an environment.
Firstly, the psychology of a person becomes infinitely more malleable and susceptible to stimuli when the environment itself is controlled and contained. Specifically in an airport or a mall, there are set stimuli present that create an ideal consumer mindset: audiences are relaxed and happy, as they are generally doing something they want to be doing, whether travelling or shopping. In other words there are experiencing something pleasurable and their mindset reflects this.

In addition, the airport audience for example are captive to that controlled environment with no-where else to go and significant waiting time. That captivity translates to an audience seeking stimulation – a mindset that makes consumers more receptive to advertising messages. As a result, with a happy, relaxed and receptive audience, whatever brand, product or service your message promotes will have guaranteed impact – a unique marketing proposition unlike anything else.

« Setting the Right Mood for Advertising!
Marketing on the Go: Out-of-Home Benefits »
We use cookies to ensure that we give you the best experience on our website. If you continue to use this site we will assume that you are happy with it.Ok